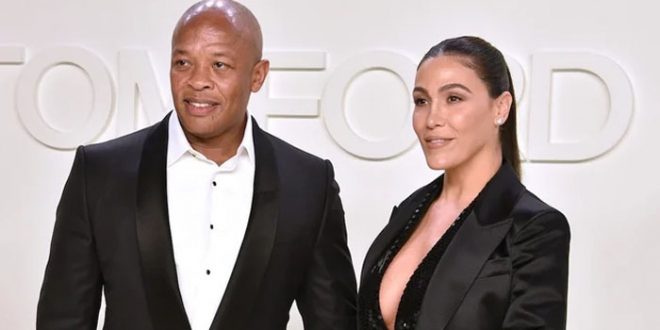 Dr. Dre’s Ex-Wife Claims She Unemployed & Struggling With Only $1M In Bank, Calls LA Sheriff To Collect Money From Him – Video

Dr. Dre and Nicole Young are still at loggerheads over their di-vorce settlement. The couple has been in the news for over a year as they cross sw-ords over the division of assets. Despite the ruling of courts in favor of Nicole, she recently unveiled that she is still not paid by Dr. Dre her due amount.

She a-ccused her ex-husband of not acting in accordance with the court’s order. The couple filed for di-vorce in 2020 after being in marriage for 24 years. Nicole made charges against Dr. Dre for not remaining loyal to the relationship and involving in ad-ultery.

According to Young, the pair had a prenuptial agreement which Dr. Dre tore away as a ‘romantic’ gesture in the early days of their marriage. She argued that at that time she was unaware of how things will unfold in the future as their relationship will grow. The relationship was one-sided, insulting, and unfulfilled, she added. Hence, she is rightly entitled to half of everything that Dr. Dre has.

While both Dr. Dre and Young, with the intervention of the court, eventually reach an agreement, Young claims that Dr. Dre is using delaying tactics to avoid the payment. The judge orders Dre to pay $1,550,000 to Young to cover her legal fees as she is currently unemployed. However, as per the legal documents, Dre failed to comply with the court’s order.

Nicole and her team said that to this date, Dr. Dre has paid just $325,433 and is simply brushing off the court’s order. Dr. Dre and his legal team are planning to file a case again to reverse the court’s order of covering Young’s legal expenditure. “Andre is doing whatever he wants to do because he is an enormously entitled and well-funded litigant who seeks to exact retribution on his former wife by decimating her financially leaving her without legal representation in this case,” the statement released by Young’s legal team.

Young argues that it’s really difficult for her to fi-ght a man with such enormous wealth and strong ‘connections.’ She believes that he is being ‘cruel’ towards her and that the courts, though indirectly, are approving of his actions. She also fears that once all her funds are dried up, Dre would try to manipulate the courts by every possible means.