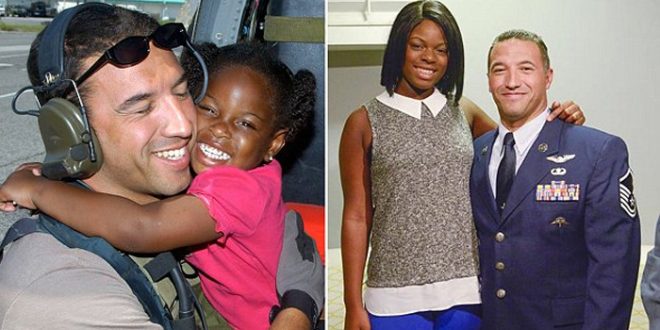 Air Force SGT. Is Reunited With Child He Saved From Hurricane Katrina – Video

Maroney describes the rescue of Brown and her family from Orleans water as one of his toughest periods after his deployment in Afghanistan.

Maroney has been looking for the little girl for over a decade on social media by launching #FindKatrinaKid. Finally, they were reunited in a TV show named ‘The Real’. The show recreates the hug of Maroney and Brown. As Brown stepped onto the stage to hug Maroney, he was filled with tears. The hug from a 3-Year-old girl to a straight 13-year-old girl.

Maroney further added that her hug has helped him a lot during his tough days. He also stated that “she rescued him more than he rescued her”. Also, the report of KTVU states that both Brown and Maroney are facing financial issues.

Maroney could no longer serve the Airforce due to an injury, hence the host of the show has gifted each of them $10,000. The image went scattering all over the media, appearing on Magazine Covers & Phone cards. The day will be treasured in their memories. The day fulfills both their dreams.

Previous Alert Teen Stops Everything To Help Confused And Shaking 87-Year-Old Get Back Home – Video
Next Substitute Teacher Living In His Car Gets $27,000 Check From Former Student On 77th Birthday – Video