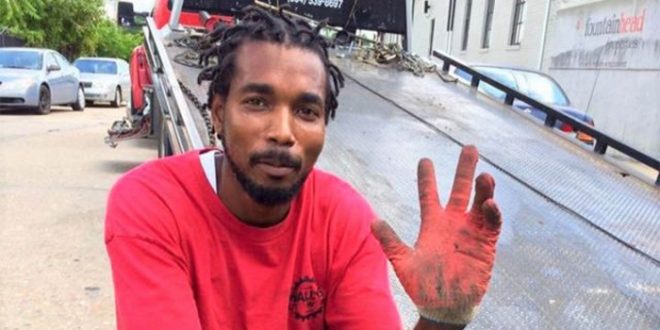 When a disabled man’s tire nearly fell off of his modified van while driving, a kind tow truck driver came to help him fix his vehicle, and did it free of charge. Josh Smith is a quadriplegic and has lost the use of some of his limbs due to pa-ralysis. He uses a wheelchair to get around, and has a modified van which allows those in a wheelchair to drive.

His mother, Caroline Smith, shared that as Josh went out to run some errands one day, his tire nearly fell off of the van while he was driving and he needed to call a tow truck driver.

“My son is a quadriplegic and drives a modified van,” Caroline wrote in a post online. “This morning when he went to drive off in his van, the front driver’s side tire fell off! All the lug nuts came out and the rim and tire were damaged. Apparently someone attempted to st-eal the tire in the middle of the night, but because it is a modified van, could not get the tire off with a regular jack. This kind of incident is annoying for able bodied people, but when you are paralyzed and in a wheelchair, and you lose the use of your modified vehicle, it becomes extremely problematic!”

They needed a specific flatbed tow truck to be able to tow his modified van, and after a bit of calling around, they were able to find a driver who could come to help: Jason. “After much calling, we finally found a towing company that could come right away with a flatbed tow truck to take the van to the shop. Jason from ‘On Time Towing’ in Richmond, VA went above and beyond to help my son out. He had to rig a system to get the van just enough on the bed of the tow truck to get a jack underneath to remove the damaged tire. These modified vans have lowered floors and it took some time to even do that.”

After hoisting the van, Jason saw that the hub assembly was not damaged and that a spare tire would be enough to help Josh get on his way. He removed the damaged tire, replaced it with a spare, and then lowered the van back down so that Jason could continue running his errands.

“Once Jason saw the hub assembly was not da-maged, he offered to put on the spare tire for my son so it did not have to be towed.

It was a very hot and humid day today as well! Jason truly was a life saver for my son! My son was able to drive his vehicle to an important event this evening until he can get to the shop on Monday. Thank you, Jason! You rock!” Many hearts online have appreciated the tow truck driver’s act of kindness for Caroline’s struggling quadriplegic son.

Shawn – Angel’s come in many different forms, this tow truck driver appears to be there and fixed the mans car. I guess when you need help in a bind, out comes someone who did a good deed and doesn’t expect the owner of the van to pay for helping him out. The towing company should be very proud of having a person who goes the extra mile for a disabled person, it should give that towing company great PR. Well done sir, great job helping the disabled person in an act of kindness, something which the world could use more of.

He confirms my belief that there is good in most people. Sometimes we just need to ask to see how willing others are to help.

Donna – God bless this tow truck driver for helping . There are good people in this world.

Janet – God bless you Jason ! God gave you to this man because God knows you have a kind heart and you are a compassionate person .May your tribe increase because the world needs people like you

Dave – These mean acts of cruelty need to Stop. Instead do something good for these people and yourself also. It will make you feel better.