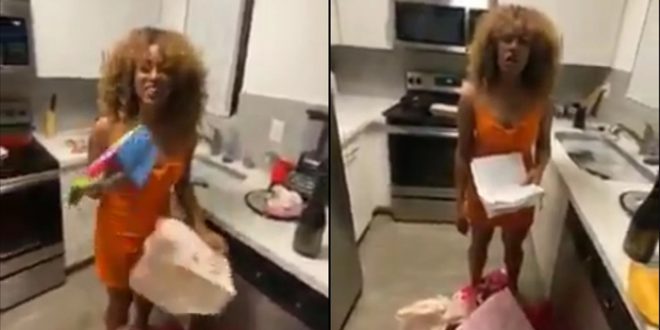 Dude Hands His Girlfriend DNA Test Results On Their Child’s Birthday, Bl-asts Her For Che-ating And Lying To Him – Video

Birthday surprise went wrong watch as the man gives DNA test results to his girlfriend on their daughter’s birthday to prove he isn’t the father. Ch-eating is never justified, and it goes both ways. If a woman can blast her husband or spouse for ch-eating, so should men. A man recently went ahead and made elaborate plans to confront his girlfriend about ch-eating, and it’s a masterpiece in re-venge.

His girlfriend had not only ch-eated on him but also tricked him into thinking her child was his. The ki-cker? The guy filmed the entire thing. And after sharing the video online, it immediately went viral. The video begins with the guy handing his girlfriend a gift bag, and she has no idea what to expect. She thought the gift was a loving gesture from her boyfriend for giving birth to a daughter for him. So, she appears really excited about opening the gift bag. The gift bag also had a bottle of w-ne, which made it look like genuine.

The woman then guesses whether the birthday present is a necklace or a trip to Dubai as she unwraps several bags. This goes on for a while until she gets to an orange envelope. She finally finds a piece of paper inside. She remains excited, never expecting what could be in it. With her hopes up, she opens the paper to read. To her greatest shock, she discovers the papers were DNA test results of her daughter, proving the man isn’t the biological dad. She immediately jumps into ‘OMG. Why would you do this!?’ mode. But it’s clear there was no way out of this.

The guy then tells her that he always suspected that the daughter wasn’t his. So, he took a DNA test to confirm his doubts. Turns out, the woman had been fooling this man for a whole three years. While this is just one instance that happened to be on camera, there are plenty of women out there lying to their partners about their children. In a similar case, a man recently took to the subreddit, Am I The A-Hole, to explain that he has decided to step out of his 5-year-old son’s life.

The man said that he came to this conclusion after learning the son he thought he shared with his ex-wife isn’t his. In the post, he explains that he became suspicious because the boy didn’t look like him nor his mother. After he confronted the wife, she admitted he wasn’t the boy’s biological father. The two had been married for three years before di-vorcing.

Jake – The daughter started growing, and family started realizing the daughter shares traits to the guy she said is just a friend.

Pamela – Wow that was like a man. Never ever compromise your etiquette, attitude and self-respect for the sake of fake love and s-x. This is not the end of the world. Great job bro, hats off to you.

Macca – Doubt people clearly understand how that Man is going to be suffering in Trust issues now. That’s the worse thing you can do to a man who actually wants to be a Good Father. St-rip him of what he believed he had. A family and then he was probably s-cared of the result that his Gut was telling him.

Limerick – Fair play to you man. Be strong dude. Life is hard and you no doubt are a good guy. Just look at the house you put around that slag. Also I feel your the poor little girl. But you doing the right thing.

Edgar – At least he was nice to give you the end of the month. I woulda waited till you was at your moms or something and brought your stuff to you .

Previous Miley Cyrus Explains ‘Non-Negotiable’ Rule For Relationships After Divorce. Rule for Future Relationships – Video
Next Man Gives His First Class Seat To 88-Year-Old Elderly Woman Making Her Dream Come True And He Sits Beside The Toilet In The Economy Class – Video